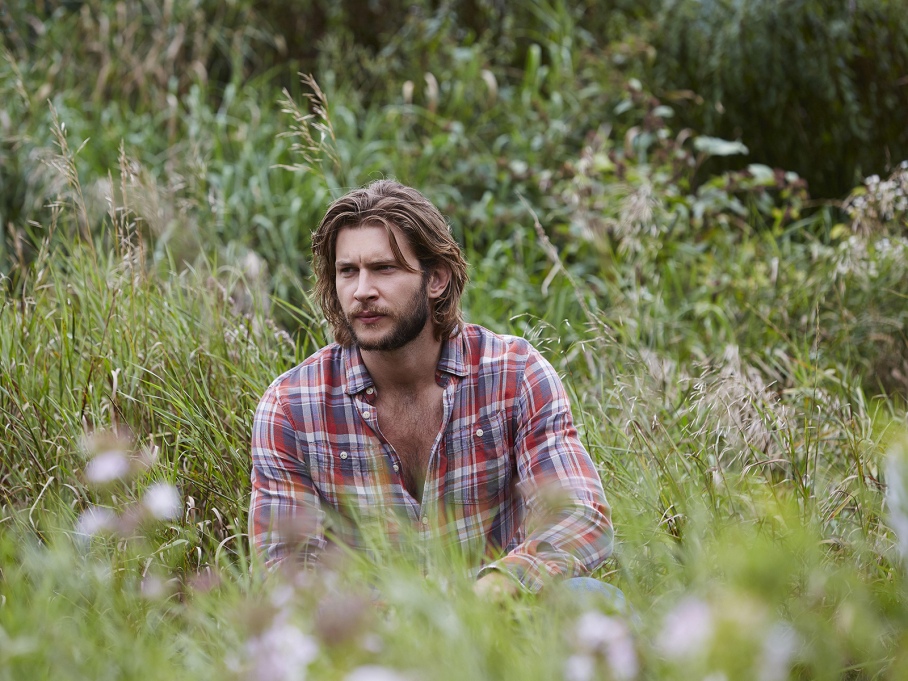 I’ve interviewed renowned gardener Mike Stefancsik on numerous occasions. I happened to run into him one day at the Westside Safeway back in 2008 and while we were chatting near the dairy section the conversation switched to his grandson who was starring in a new movie that had just been released. It was Slapshot 3 The Junior League. Mike is the epitome of a proud grandfather and he urged me to get a copy and watch it. I did. And I’m going to be totally honest, it wasn’t the greatest movie I’ve ever seen—tough to top the original Slapshot with Paul Newman but nevertheless there were some funny moments—The Hanson Brothers were back, Leslie Neilson brought some credibility to it and I have to say I thought Greyston was really good as the male lead. I could see his potential. Not only is Mike a great grandfather he is a good PR man too. When Greyston was in town visiting he called me and asked if I’d be interested in doing a TV interview with him. And I did. A couple of times in fact. I have to say Greyston is a wonderful, down-to-earth young man who has earned his way to bigger and better roles never forgetting his roots and the importance of family. Right now Greyston has an integral part in the hit series for Space TV called Bitten. Again, he was very gracious and took some time out to answer these question. I’m thinking Grandpa remains incredibly proud.

I’m only doing this interview because I can’t get your grandfather off my back from constantly telling me how proud he is of you. (just kidding but he is pretty damn proud of you.) Before we get into your career in acting talk about your relationship with your grandpa and your memories of coming to Lethbridge.

I’ve always been extremely close to my grandparents. From the age of six I would spend a month or two every summer with them along with my cousins. The first couple years were out at their farm near Picture Butte and the remainder, until age 15 or 16, were at their home in West Lethbridge. My cousins and I would pick veggies from the garden with Nagymama, play dice, watch Nagypapa tend to his Bonsai’s, bike around West Lethbridge and EAT LOTS OF HUNGARIAN FOOD. Absolutely my fondest memories from childhood.

When did you first get the acting bug?

I took an acting class in high school on a whim to fill out my arts credits and I loved it.

What was your first big break?

It’s kind of hard to put a finger on my first “big break”. I was on a show called Durham County which solidified in my mind that I could actually have a career in  acting. On the other hand as far as exposure is concerned Bitten has been my biggest project to date.

Is acting something that can come naturally to someone or do you think it’s vital that he/she take some kind of formal training?

I believe there is an innate acting ability that some actors have. An eye for the realism of a scene or performance. That being said classes and training are essential for some to hone their craft. I was fortunate from early on to work quite steadily so most of my training came on set working with experienced actors. Basically there’s no right or wrong. You need to find what works best for you and your process. I’ve always thought that as along as your performance is believable and natural it doesn’t matter how you get there.

Who has been your favorite actor/actress to work with so far?

To be honest the cast of Bitten. Everyone works so hard and lays it all out every day on set. We’ve created a real family. They are the best! (For those who really want a single actor though I’d have to say Leslie Nielson. We worked together a few years back on Slap Shot 3. He was a Canadian legend and I feel honoured to have had the chance to work with him.)

Your current series Bitten is seen on The Space Channel. It averaged 348,000 viewers in its timeslot, making it Space’s highest-rated original series of all time. Is this a surprise to you?

Even though I know our show kicks ass and our fans are extremely passionate I guess I’m surprised because we have some tough competition from Orphan Black and other great shows on Space. We’re in good company.

Take us through how you got the part.

It’s quite the process. I’ll break it down in point form. There was an initial audition that I taped and sent to Toronto. A week or two later the producers sent notes on the character and my scenes. I re-taped and sent it back. A couple weeks after that I had a Skype audition with the producers. They then flew me out to Toronto to do a chemistry read with Laura who was already cast as Elena. Two other actors from LA were there as well so it was between me and them. It wasn’t until a week or so after that that my agent and I received the good word. LONGEST WEEK OF MY LIFE!! We popped the champagne at 10 in the morning.

Why do you think this whole Werewolf genre is resonating with such a big audience?

Although we are a SciFi/Fantasy type genre I think that within that Werewolves have a more grounded and relatable nature. We play on the man and beast’s most primal instincts. Lust. Hunger. Fear. Rage. We all have these things in us and occasionally they are exposed.

You live in Vancouver and you shoot the show in Toronto. How tough is that to deal with?

I’m a West Coast boy. I grew up on a small island called Salt Spring so my heart is with the ocean. It’s always hard to leave but Toronto is growing on me. I’m a big foodie and the restaurants in TO are truly world class. I’m slowly eating my way through that city.

As you continue with your career what kind of roles are you hoping to get or does it really matter? Is a gig a gig?

I really do enjoy working on anything. If I had to pick I would love to land something on Game of Thrones or Hell on Wheels. I love period pieces.

Any chance that you really are a werewolf ? (I have to ask for legal reasons)

Well I have an insatiable appetite and a penchant for nudity so maybe.

You play guitar and you’ve been in a few bands over the years. Is that something you’re able to maintain at all?

I still play guitar and write however being in a band is tough with my schedule. Occasionally I get together with my old drummer in Vancouver and jam out over a few beers.

You’ve been nominated for a Golden Maple Award. Explain what that is and how exciting it is to get the call.

I’m extremely honoured to be nominated for a Golden Maple. It recognizes Canadian talent on shows airing in the US. I’m proud to be a part of anything that put’s Canadians in the spotlight.

If you win the award, have you got thoughts about what your acceptance speech will be like?

Ha. Nope. Ironically enough I’m terrible at speaking in public. I once had to make a small speech at my cousin’s wedding and I choked. Completely froze up. For that reason I’m almost hoping I don’t win……….almost.

How important has it been to have such a supportive (I assume) family when you decided to pursue acting.

Having the support of my family and friends has been invaluable and integral to my success. In an industry like this when you constantly doubt yourself you need word to know that you have a solid core of people behind you. I know some do it without that and hats off to them. I might have cracked.

What advice would you give young kids who want to get into the business?

That’s a tough one. I have to say if I had kids I would be worried for them getting into the business. It’s a tough go and it doesn’t always work out the way you planned. If you really want to go for it I would say have thick skin and be patient. There are a million reasons why you DIDN’T get the part and 99.9% of them are out of your control.

Have you got anything other than Bitten in the works?

Nothing at the moment. Just auditioning. I’ve by no means “made it”. I still have to get out there and put work in to get the next job.

What one director would you love to work with?

Scorsese. I find he really allows you to be bold with your characters. Go big.

How about a favorite actor and actress you’d love to work with?

What’s the most important thing you learned from your Grandparents?

The most important thing my grandparents taught me was to be humble and never forget where you came from. I never will.